A steady stream of Mexican residents strolled across the Gateway International Bridge into Brownsville, Texas, on a recent hot and humid evening.

In ones and twos, they walked two-tenths of a mile into America, to a plasma center with a sign welcoming them as heroes; convalescent plasma is being investigated as a treatment for covid-19. Then, a pint or so lighter, they returned home with bandages on their arms.

Selling the liquid part of blood has become one of the few cross-border activities permitted under current restrictions, which divide a community that spans the Rio Grande. The bustle of life around the 1,250-mile border is on pause: In Laredo, the number of people crossing from Mexico by bus is down 60% from a year ago, according to the most recent U.S. government data. In Progreso, visitors traveling by foot have fallen by half.

The usual stream of Mexican shoppers who visit stateside stores has dwindled to a near halt. And Americans who get their medications in Mexico for a fraction of the cost worry they’ll be cut off as border-crackdown rhetoric intensifies. Entry points are down to just two lanes in some spots, with the only visitors traveling north on business deemed essential.

Freddy Khlayel-Avalos, an El Paso resident and school board member, has relatives who haven’t been able to visit since restrictions were imposed in March. “To me, it’s another example of blaming America’s problems on immigrants,” he said.

The Rio Grande Valley, a four-county region that stretches across Texas’s southernmost tip, remains one of America’s most afflicted areas, with the highest hospitalization rates, deaths at more than twice the state average, overwhelmed hospitals and refrigerated trucks serving as backup morgues. President Donald Trump’s administration has extended border restrictions until at least Aug. 20. The resulting stasis is a stark change for a uniquely binational culture.

In 2016, Nielsen found that 3.5 million consumers crossed the Valley border each year to fill prescriptions, visit family or shop for clothes; 63% of visitors to the U.S. came at least once a month. Those who visited five or more times in a month took an average of 48 trips and spent two-thirds more than all other visitors. The Border Trade Alliance, a nonprofit that represents businesses and local governments, has said “an indefinite halt to cross-border travel will result in an economic calamity.”

At La Copa Hotel in McAllen, Mexican shoppers visiting La Plaza Mall next door typically book 90% of the rooms, according to Carolina Sanchez, the general manager. With shopping not considered essential, the hotel has been filling just five or six rooms a night, she said. The only recent influx of business came in July from nearby residents who lost power during Hurricane Hanna and a roofing company that booked rooms for workers repairing damage from the storm.

On the other side of the border, the pandemic’s effects are equally grim. Like their U.S. neighbors, Mexican states have seen a spike in covid-19 cases in recent weeks. The Tamaulipas health minister warned recently that hospitals in several cities, including Matamoros, were full, according to Mexico News Daily. KABB television in San Antonio quoted anonymous Mexican officials who said covid-19 victims would be buried in mass graves if funeral homes were unable to cremate bodies within the 12-hour deadline mandated by the state.

People who cross are taking preventive measures seriously, at least at checkpoints, said Luis Torres, a 43-year-old collector for Cameron County’s International Bridge System. He said he has some concerns about catching the virus while working, so he uses hand sanitizer frequently, keeps his mask on and wears gloves when exchanging dollar bills for coins that can be used in the turnstiles.

But each country sees the other as the source of infection.

“It turned out to be very lucky for us that we had the wall or we would have been inundated because they have some big problems there,” Trump said last month.

Meanwhile, the governor of the Mexican state of Tamaulipas has called on the country’s central government to impose stricter border checks. The health minister of Sonora state, which abuts hard-hit Arizona, has urged fewer crossings by U.S. residents. But Americans remain able to travel to Mexico with relative ease.

“There’s an increasing resentment on the Mexico side because they’re not allowed the mobility that U.S. citizens are given,” said Tony Payan, a professor at the Universidad Autonoma de Ciudad Juarez and director of the Center for the United States and Mexico at Rice University’s Baker Institute. “It’s puzzling that the president thinks that Mexicans per se are contributing to the coronavirus cases, when it’s U.S. citizens who have not lost their mobility.”

Even with northbound crossings down sharply, some on the U.S. side are urging more restrictions. The chief economist for a conservative think tank called for additional controls, arguing that the disease was mostly a Hispanic phenomenon. “Why not #openschools, end universal mandates & check those from Mexico,” Vance Ginn of the Texas Public Policy Foundation wrote in a since-deleted tweet.

The jockeying has some Americans worried a further crackdown could keep them not just from family and business, but from vital necessities.

“If I don’t take my medication, I will have a seizure,” said Carlos Leon, a 32-year-old Laredo resident. He’s able to get 50 pills for 36 pesos, or $1.62, in Nuevo Laredo, the sister Mexican city. In the U.S., that would cost about $13 for only 30 pills. Leon, who recently got a job with a staffing company verifying Facebook posts for accuracy, doesn’t have health insurance.

“Covid came in to make the invisible very visible, which is systematic disparities in health and well-being,” said Eva Moya, an associate professor at the University of Texas at El Paso who focuses on social work and public health.

Meanwhile, America is looking to Mexicans for plasma. The Food and Drug Administration is seeking to “dramatically increase” donations by the end of August, particularly from those who have recovered from Covid-19 and therefore have antibodies. It’s a common way to make money in normal times, but donors have become an increasing percentage of visitors now that other crossings are limited.

Donations are deemed essential, and they can pay as much as $65 an appointment, according to CSL Plasma, which operates donation centers across the U.S.

“I know a lot of people who cross for work and to donate plasma,” said Torres, the toll collector. “The pay in Mexico is real low. They do it to help themselves out.”

Among them on a recent day was 28-year-old Edgar Soria, who crossed into Brownsville. Soria, who lives in Matamoros, walked directly from the bridge to a CSL location. Emerging from the building, he said simply that he was happy to be part of the effort. Then, he walked off alone toward the bridge back to Mexico. 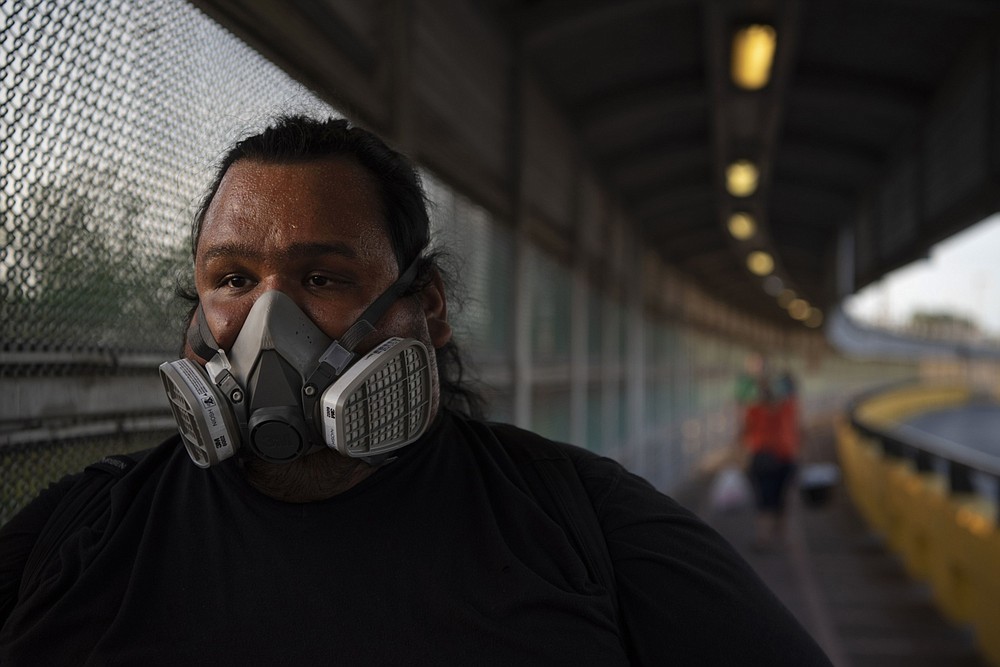 A man wearing a mask walks toward Mexico. MUST CREDIT: Bloomberg photo by Callaghan O’Hare