‘This time next year, we’ll be millionaires.’ That was the regular boast of Del Boy to brother Rodney in TV comedy Only Fools And Horses when he had stumbled across ‘the next big thing’.

But in recent times such hype has been applied to investing in crypto-currencies – an easy way of turning tech nerds into tycoons.

Indeed, though it may have taken longer than 12 months, had you invested £20 in the crypto-currency bitcoin a decade ago, you could in theory be a millionaire.

This Tuesday, the bitcoin is expected to undergo a ‘halving’. This means the reward for ‘mining’ new coins will be half what it was.

Some experts believe it could spark renewed interest in such digital money because only a limited number are in circulation.

Yet as people scramble around for new ways to make money in these challenging times, will bitcoin offer a new opportunity for investors to make a profit?

Or as legendary investor Warren Buffett believes, is it no more than ‘rat poison’?

Those of a nervous disposition will not have enjoyed watching the value of shares fall off a cliff, then recover slightly, in recent weeks.

But this roller-coaster ride is nothing compared to the rocket-fuelled adventures of those who have dabbled in crypto-currencies.

One moment they are gambling pocket money, the next they are super-rich. But just when they are poised to cash in those digital chips it can all go horribly wrong – and their investment turns to ashes.

The Bitcoin is the poster boy of ‘virtual currencies’ though you can also invest in ethereum, ripple, Zcash or dash.

No coins or notes exist – it is just a computer file stored in a ‘virtual wallet’ to be saved or spent on goods and services with others that accept the technology.

A record of all bitcoins is kept within a ‘blockchain’ – a computer database of encrypted code files that creates a marketplace for traders.

He adds: ‘Bitcoin is an investment only suitable for the sophisticated investor and even then only as a small part of any portfolio.

Mystique surrounds crypto-currencies, including the view that they are a bit shady. They have a reputation as a currency favoured by criminals for illegal trading and money laundering, but the reality is that even if true the underworld also likes cash.

The origins of bitcoin are not even known, though it is believed to have been created in 2009 by a Japanese computer coding genius going by the name of Satoshi Nakamoto.

The number of bitcoins in circulation will never exceed 21million because that is how many have been programmed to exist.

They are ‘found’ by ‘mining’, a process that requires super-powerful computers to go through reams of mathematical permutations in search of a hidden code.

You also need a lot of luck – it is like searching for a needle in a haystack. So far 17 million have been ‘mined’.

Digging up digital money is getting harder. If the bitcoin undergoes a ‘halving’ this week the reward for successfully mining the crypto-currency will be 6.25 Bitcoins (about £44,000) – half the 12.5 bitcoins you previously were rewarded if you managed to crack the mining code.

Crypto-currency investor Harry Brown has a smartphone app that allows him to keep tabs on his investment in ethereum, a rival to bitcoin.

But he believes crypto-currencies are ‘all hype’ because the £900 investment he made two years ago is now only worth about £160. He chose ethereum because he was told it ‘was the next big thing’.

The 52-year-old Hertfordshire-based lawyer says: ‘I will not sell, but keep the investment as a reminder never again to be gullible enough to fall for such a get-rich-quick scheme.

‘These virtual currencies have no real application. I would have been better off buying something tangible, like a second-hand car.’ 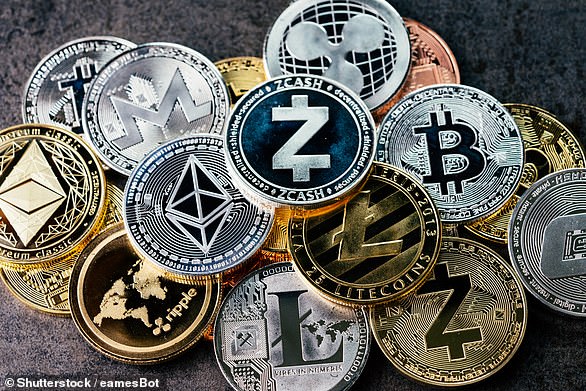 Crypto-currency investor Harry Brown has a smartphone app that allows him to keep tabs on his investment in ethereum, a rival to bitcoin

Like many, Harry invested after hearing how others had made a fortune. He had a friend who had turned an investment of £2,000 into £50,000.

Harry says: ‘It’s like a one-armed bandit where you make the odd gain along the way but lose money in the end.

‘I kept the investment in the hope of a big rise and have been disappointed. Sadly, my friend has ended up losing most of his cash.’

Harry bought ethereum through website Coinbase and paid £20 in commission. He compares his investment with that of ‘the tulip craze’ in Holland in the 17th Century.

Back then, investors were willing to pay escalating amounts for the most rare and beautiful flowers.

At the 1637 peak, the most sought-after tulip bulbs traded for 200 florins each – £750,000 in today’s money. Prices collapsed when it was realised that they were only buying flowers.

Mark Ward, head of trading at wealth manager Sanlam UK, is a sceptic: ‘Bitcoins and other crypto-currencies are not true currencies – at least not yet – but commodities. The price of a single tulip bulb in the 1600s could buy a house with an acre of land – even though its intrinsic value and usefulness remained essentially nothing.

‘Only time will tell whether crypto-currencies are the tulip-mania of the digital world.’

The ‘halving’ automatically takes place every time 210,000 ‘blocks’ of Bitcoins are dug up – which happens roughly every four years.

This halving is built into the complex computer programme introduced by mysterious creator Nakamoto in 2009 as part of the process when he created bitcoins.

Financial adviser deVere believes this could spark renewed interest in the digital cash – boosting a Bitcoin’s value short term to £8,000.

For most people, the best way to get hold of Bitcoins is via an online trader such as Coinbase, Kraken, Bittylicious or Bitstamp.

You do not have to purchase single Bitcoins – you can invest in fractions.

You can buy a hundred millionth of a bitcoin – known as a Satoshi, which is worth about 0.007p.

There are only a limited number of goods and services you can spend your crypto-currencies on – most shops still view it as a gimmick.

You can use bitcoins to buy computer games from Microsoft, soaps from shopping chain Lush and even to make a donation to the RNLI.

Some experts believe that one day it will be cheaper to trade in crypto-currency as it cuts out all the middlemen – such as commission-charging banks and card providers.

If you wish to sell your crypto-currencies this is done through an online trading platform such as Coinbase, with a trading fee of typically 1.49 per cent when you wish to turn any digital currency back into pounds.

Some links in this article may be affiliate links. If you click on them we may earn a small commission. That helps us fund This Is Money, and keep it free to use. We do not write articles to promote products. We do not allow any commercial relationship to affect our editorial independence.