Right now, Bay Area diners can’t sit down at a favorite special-occasion restaurant to a multicourse meal with wine pairings. But what they can do is raid some of those top restaurants’ wine cellars.

In this moment of economic uncertainty, as communities are left wondering how long they’ll be sheltering in place to halt the spread of the coronavirus, many restaurants are selling off treasures from their extensive wine collections. For customers with disposable income, these cellar sales represent a precious chance to buy wines that aren’t often available at retail — and at much lower prices than a restaurant would normally charge. For restaurants that are laying off staff and wondering how to pay the rent, these wine collections represent serious cash-flow potential.

“Your wine cellar is actually your best investment as a restaurant,” says Matthew Dulle, beverage director of Lazy Bear. “Wine is the one thing you can always sell back.” It can even turn a profit: Certain wines, such as first-growth Bordeaux and Grand Cru Burgundy, can sell at auction for many times their original price, and may appreciate in value significantly over time.

These are wines for the 1%, to be sure — with bottle prices in the hundreds and thousands of dollars — but there’s a market for them, especially in the Bay Area. And the tantalizing possibility for restaurants to sell off their valuable collectibles to wealthy private buyers is easier than ever. California’s Department of Alcoholic Beverage Control has temporarily relaxed certain regulations, allowing all restaurants to sell wine as retail purchases even if their licenses hadn’t previously permitted it.

Manresa restaurant in Los Gatos has sold over $50,000 worth of collectible wine since the shelter-in-place orders began, says wine Director Jim Rollston. Because Manresa presells its $295 dinner tickets on the online reservation platform Tock, it had to issue significant refunds when canceling reservations. “We knew (the wine) was going to be a one-time booster for revenue,” Rollston says. “It’s what you’ve got to do in extraordinary times.”

Some of the most in-demand bottles at Manresa have included Raveneau Chablis, Keller Riesling, Liger-Belair Burgundy and Clos Rougeard Cabernet Franc. Rollston estimates that he’s sold about 10% of Manresa’s wine cellar, by value. Most sales have been to individuals, though auction houses have contacted him to see if he’s willing to consign more rare bottles. But now that the cellar has brought in some income, he’s trying to slow down: “We’re backing off on pushing the rare-wine sales at this point,” he says. “Some of these bottles can’t be replaced.”

Matt Straus, owner of the wine-centric Heirloom Café in San Francisco, has been building his wine cellar for 20 years. While he is currently selling about 50 cases a week as retail purchases, liquidating the cellar is “the last decision that would have to get made,” he says.

To avoid that fate, while keeping up some much-needed cash flow, Straus, Dulle and many of their peers are getting creative: offering special bottles, new experiences and retail options that they couldn’t consider before the shelter-in-place orders.

Lazy Bear, which in normal times serves a high-end tasting menu in the format of a communal dinner party, has transformed its restaurant completely. Now it’s a general-store-style commissary: You can walk through the space and shop for “take-n-bake” chocolate chip cookie dough, sandwiches, a Champagne and caviar kit, and more. And Dulle has stocked the floor with a selection of off-the-beaten-path finds from the restaurant’s cellar.

“We’ve transitioned to offering some of the rarer, vintage stuff that you’d see on our list if you came in for the dining experience,” he says.

At Heirloom, Straus launched two new ventures to keep his wine customers engaged. One, Cellar-20, is a club in which members can share allocations of hard-to-buy wines; it requires an initial $5,000 or $10,000 investment, guaranteeing access to wines for subsequent years. It already has 20 members.

Most wine drinkers don’t have a spare $10,000 to drop on collectible wine, though. For the other new initiative at Heirloom, called Saturday Wine, Straus will host a Zoom conference tasting with two wines that people can purchase beforehand: this week, the 2018 Domaine Rollin Hautes Cote de Beaune Blanc ($35) and 2016 Les Matheny Arbois Poulsard ($35). It will take place each week as long as shelter in place continues. 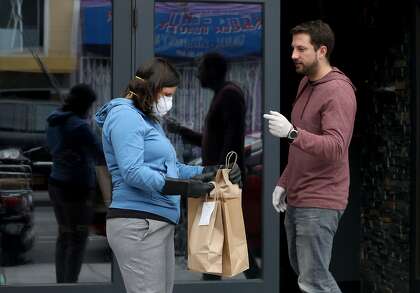 Restaurants add a higher markup to wine prices than retail shops do, and as many Bay Area restaurants shift to retail models they’ve been forced to reconfigure their pricing scheme. “We’re trying to incentivize people to buy,” says Tara Patrick, wine director for Mourad and Aziza, the latter of which is open for takeout and delivery. Typically, Aziza marks up a wine’s wholesale price three times for its wine list. Right now Patrick is increasing the wholesale price by two and adding $5.

“Trying to make a profit at this point isn’t really the endgame,” she says. “It’s just to maintain solvency.”

Aziza’s wine cellar is worth about $28,000, Patrick says, with most bottles hovering around $60 or less. That’s an asset, but it’s not the sort of trophy cellar with investment-grade bottles that’s housed, for example, at the higher-end Mourad, where Patrick says she’d be reluctant to raid the depths of the cellar.

Of course, determining a strategic agenda is difficult when the world is facing a pandemic of unprecedented proportions, with disastrous economic consequences. But as restaurateurs weigh the benefits and risks of utilizing their wine collections, one thing is clear: When they can reopen their dining rooms, they’d better hope they didn’t sell off all of the special bottles that they spent years, or decades, collecting.

Says Straus of Heirloom: “If the cellar goes away, the restaurant goes away.”