90 Day Fiance star Larissa Dos Santos Lima (the ex-wife of Colt Johnson) got new ink to hide a plastic surgery boo boo. She has been undergoing a complete body transformation. And her latest procedure was a trip to see a tattoo artist.

Larissa Lima is no stranger when it comes to altering her appearance. Over the years, the 90 Day Fiance castmate has undergone a few cosmetic procedures. She has been open about the work she has done and says that she wants to achieve her dream body. On Happily Ever After, Larissa took viewers along as she got breast implants and a nose job. She had her boyfriend, Eric Nichols, by her side to help her recover.

However, the 90 Day Fiance reality star didn’t stop there. Since then, Larissa Lima has gifted herself with a tummy tuck and a Brazilian butt lift. And, more recently, got a thread lift for her eyes. The procedure gives the eyes more almond-shape, also known as “fox eyes.” Larissa has become a regular when it comes to going under the knife. But, her cosmetic journey isn’t over.

Larissa Gets Ink to Cover up Scars

Larissa Lima’s latest procedure doesn’t involve a knife, but there were a few needles. After the 90 Day Fiance cast member got her abdominoplasty, she was left with a scar, and it has been her “desire” to get it covered up. Larissa got a “tattoo camouflage” to hide the scar. She suggested that if anyone has scars that they want to cover up for modeling or just to conceal them, they should get this tattoo.

90 Day Fiance’s Larissa Lima was happy with the results. However, she was a bit sore after getting her new ink. But, she said that she would reveal the results once she is all healed. Larissa may be happy with the look of her new tummy, but will this be the end of her journey of getting her dream look? 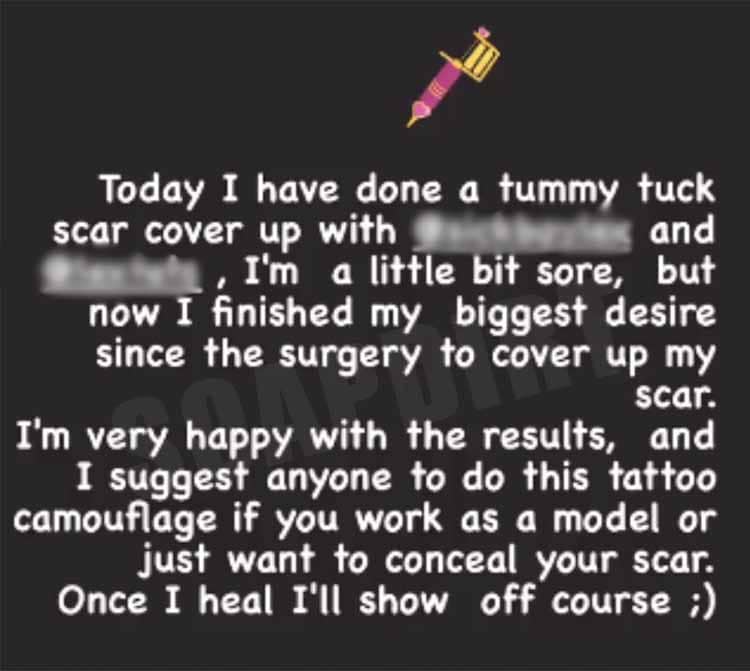 Last month, Larissa Lima was let go by Sharp Entertainment. So, she will not be a part of any of TLC’s programs including 90 Day Fiance spin-offs. TLC and Sharp have been by Larissa’s side all throughout her criminal history. But, after participating in “extracurricular” activities online, they have decided to part ways. However, Larissa doesn’t seem to mind since she’s been trying to make money online with revealing content.

However, it didn’t take long for the 90 Day Fiance alum to get back into the spotlight. Larissa Lima recently showed off her new body on stage. She was the main feature of a magic show. The show is a series that follows the magician, Jack Alexander, as he puts on a show, and Larissa was a part of the act. During the show, she flaunted her dance moves before getting cut in half. She then comes out all in one piece. Could she plan on starting a career in the magic business?